The day before storm Hannah arrived we had spent time in two of the hides on the Shapwick Heath National Nature Reserve watching up to 9 distant Hobbies together.  Photography was out of the question as the birds were so distant and the light was poor.

Overnight the gale force winds and the rain arrived shaking our caravan but by breakfast the rain had stopped and patches of blue sky were beginning to appear which gave encouragement for potential photos.  We (Liz, my wife and I) returned to Shapwick Heath and set off for the hides.  The wind was so strong that at times, it stopped us in our tracks!  However, we eventually made it to the hide which was on the sheltered side of a piece of carr woodland and overlooked a reedbed.  As Hobbies hunt into the wind, this provided the best option; I would be getting head-on shots.

As we sat down and before we had a chance to open any of the windows, 4 Hobbies flew past one after the other.  We anticipated an exciting session so as soon as the birds were out of sight, we opened as few windows as were necessary , got the camera ready and waited ….. and waited some more!  For the next half hour there was no sign of these lovely birds.  They were obviously sheltering in the trees somewhere out of sight of the hide.  Insects, their usual prey at this time of year, would not be flying in the strong winds.  If they did, they would end up a couple of counties away in no time.  Not a good scenario for the Hobbies! 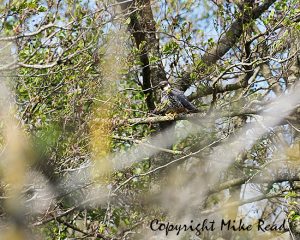 Eventually, one hobby flew past and headed for a perch among the trees to the left of the hide; it was just about visible among the foliage.  Despite its fairly sheltered position, at times it seemed to be having to hold on very tightly!

Even with the strength of the wind, hollows and sheltered spots where insects might be roosting, would be warm enough to stir them into activity.  Gradually more insects were flying and the same applied to the Hobbies.  There were an increasing number of hunting forays and therefore an increasing chance of securing some images.  As they sped low over the reeds they were almost impossible to keep in the viewfinder.  They were just too fast and their flight so erratic as they jinked this way and that to pluck small insects from the air or chased elusive dragonflies.  However, individual birds sometimes spent some time 'waiting on' by soaring slightly higher and facing into the wind.  This was the opportunity I had been waiting for.

The motordrive worked at 10 frames per second and the continuous autofocus with tracking helped enormously.  All too often though, the roof of the hide got in the way as the birds drifted directly overhead.

We sat enthralled by the speed and agility of each individual Hobby.  Their eyesight must be fantastic to spot such small prey from some distance away and their ability to capture dragonfly or damselfly proved beyond measure; they sometimes even plucked insects from the seedling birches to the right of the hide.  We then watched the Hobbies glide up, bring their foot forwards and, head lowered, they would consume the insect. 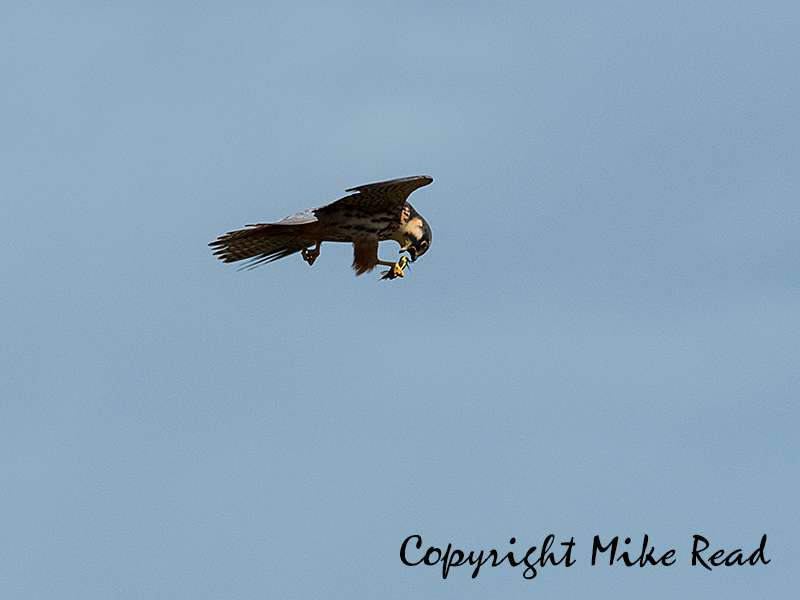 Above:  Hobby eating a Hairy Dragonfly in mid flight.

We ate our lunchtime sandwiches between bouts of Hobby activity.  As they became more active, the birds became more accustomed to the camera movement within the hide.  If a bird spotted one of the Large Red Damselflies that were active close to the hide it would come powering towards it.  Often the birds were so close that they were BELOW our viewing capabilities.  They must have been just a couple of metres from the front of the hide and perhaps less than one metre from the ground!

We sat spellbound for over 5 hours watching the speed and agility of these summer visiting falcons.  It was a brilliant experience; one we will never forget! 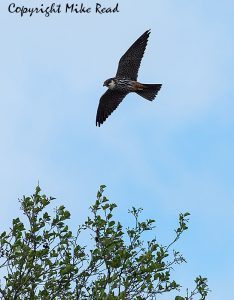 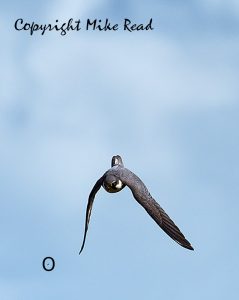 Above left: If a bird ventured above treetop height, the wind soon forced it to change its mind.

Above right: Hobbies will chase down and eat even small insects (circled).

The above three images were taken with the camera set at 10 frames per second.  The next frame shows an empty sky!