I have recently been invited to spend time in a friend’s garden where he has a pair of Sparrowhawks visiting and even nest building.  The garden is part wooded, part planted and also features a small stream which opens up into a pond.  The amazing thing is that the Sparrowhawks are approachable, especially the male as can be seen from these photos.  In the one above he was searching for somewhere of a suitable depth to bathe.  He then moved further up the stream and found the pool in the picture below and I was able to follow quite openly. 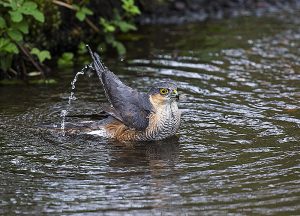 I took many images from a suitably safe distance as it bathed and with this picture (left) I really like the water droplets frozen in mid air as he continues his wash.  He just gave the occasional glance in my direction but was generally unconcerned at my presence or the frequent clicking of my camera!

I also spent much time sitting on a garden seat some distance from the Birch tree in which they were nest building.  The seat also overlooked the pond where I saw my first reptile of the year when a Grass Snake swam across the pond.  There are lots of fish in the pond too and on one or two occasions I have thrown small pieces of bread into the water and this gets seized by shoals of minnows or occasionally by the Goldfish if the latter are bold enough to venture into the shallower part of the water where the minnows spend much of their time.  Other birds are often to be seen around the garden.  There is a nest box that is being visited by both Blue and Great Tits and I wonder which will be the eventual breeders here.  It seems like the Blue Tits are taking in the nesting material while the Great Tits are set to take it over!  Other birds regularly seen include Treecreepers (which are also nest building), Goldcrests, Blackcaps and many more species.  This is a truly spectacular wildlife-friendly garden.

Back to the Sparrowhawks.  On many occasions I have watched as they collect twigs to build their nest.  Most of the time they are deep in the trees so photography is impossible but occasionally the male comes fairly close to me and tries to pull a twig from one of the birch trees as can be seen in the picture to the right.

The approachability of these birds and the joy my friend and his wife get from their presence is in stark contrast to the attitude of some folks to birds of prey.  In much of upland Britain, illegal persecution of magnificent raptors continues especially on moorlands where driven grouse shooting takes place.  Whilst I acknowledge that driven grouse shooting brings in important revenue to some of the large upland estates, I feel the illegal poisoning, shooting and trapping of raptors is totally unacceptable.    In the recent RSPB membership magazine an article mentions that in 2017 Peregrines failed to breed in the Dark Peak area of the Peak District National Park despite there being many suitable territories and nesting sites available.  Hen Harriers and, in Scotland, Golden Eagles are also sometimes shot or poisoned by gamekeepers illegally ‘protecting’ their stocks of Red Grouse in particular.  There is now a call to get Driven Grouse Shooting licensed via an act of Parliament and I feel this has to be given more serious consideration than our elected representatives seem to be interested in at the moment.  As a consequence one has to wonder how many of our politicians go Grouse shooting or how many are involved in other ways in these upland moorlands!

There is now a Parliamentary Petition set up to try to get our politicians to take action and at least debate this appalling and illegal persecution of raptors.  I feel the Licensing of Driven Grouse Moors will get the killing of raptors stopped, or at least reduced significantly, especially if there is a clause in any new law  that takes the license away for a certain period of time if illegal persecution is proved to have taken place on an estate.  I would urge as many people as possible to sign this petition before the deadline of 15th June; it needs 100,000 signatures just to get the situation considered for debate!  Here is a link to the petition.  Please sign it and ask all of your friends to do the same.

In the meantime, I will occasionally be heading back to my friend’s garden where the lovely Sparrowhawks are a welcome addition to the birdlife.